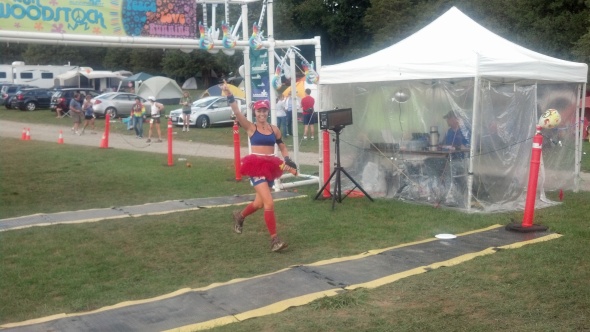 My running resume got a big boost of BOOYAH this weekend as I had the pleasure of pacing Anastasia Andrychowski “Supergirl” Rolek to her EPIC overall female VICTORY at Run Woodstock’s Hallucination 100 Mile Race in Hell, Michigan.  Already known as 100 pounds of pure inspiration, Supergirl not only completed the Midwest Grand Slam of Ultrarunning, but she did it with a new personal best of 21:46 while taking home the female victory, finishing sixth overall!

My part in getting her to the finish line started on Friday night at 10:23 p.m. and lasted for 7 hours 26 minutes and 32 miles, ending at 5:49 a.m. on Saturday.  Those 32 miles were some of the toughest 32 miles I’ve ever faced, and unlike most of my race reports, I’m finding it very difficult to describe the specific action, thoughts and struggles that took place in that particular block of time.

The main obstacle?  RAIN.  Like, a LOT of rain.  A constant, unforgiving downpour of cold, pounding rain.  From the time I picked her up for her third 16.4 mile loop on Friday night, all the way until I let her go Saturday morning: RAIN RAIN RAIN.  This continuous onslaught from mother nature not only made the trail a dangerous slip-n-slide-shoe-sucking-mudfest, but it also had the potential to drain all positive energy that lay in its path.

But not Supergirl.  Hell no.  Supergirl was upbeat, fast and full of life!  All I had to do was put my head down and keep up. 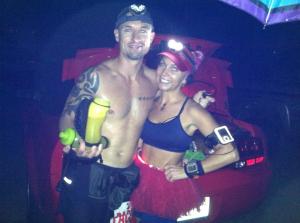 Quick pic between loops 3 and 4

We fought right through the muck.  We put the hammer down on the paved straightaways.  And while the majority of runners moved slowly through the night, shoulders slouched and spirits broken from the relentless water torture thrown down from above, Supergirl and I found a high, sustainable gear that suited her indomitable will and unbreakable spirit.

I wish that I could provide a detailed, minute-by-minute race description of this experience; but honestly, because of the treacherous footing and the dark blanket of night, I never even saw the actual course.  All I could see was the ground directly in front of me and an aid station every four miles that clued me in to where I might be at any given time.

It was such a running anomaly for me that I lost all sense of place, of movement.  It was like running on a muddy, slippery treadmill in the dark while someone sprayed me with a never ending stream from a fire hose.  I lost all track of time.  Because of the slow numbing from the chilly rain, I couldn’t even tell if I was really tired or not.  I just… was.  In fact, that was the crux of this running experience: I felt so awake, so alive.

You know that feeling you get when you jump into a cold swimming pool?  You know that bit of hesitation you feel right before barreling in?  Then there’s that moment where you just do it and suddenly your body is saying “WOOOOOOAHHHH!”  You’re extremely uncomfortable, but if you take the time to get passed the discomfort, you eventually find yourself really living life.  You feel every single hair raise, feel every breath with an unprecedented alertness and purpose.

That’s what pacing Supergirl at Hallucination was like.  I felt alive and well and motivated and present.

My entire world boiled down to one, single task: RUUUUUUUUUUUUN!!!

And I know that I was the “pacer”, that I was there to keep Supergirl on track.  But let me tell you something: Supergirl doesn’t need anyone to keep her moving.  She has all the determination in the world right there inside of her jubilant little self.  If she wants something, she works hard to get it, and this weekend was no exception.  She got it done.  With style.  And speed.

But no.  She isn’t about that.  She is about overcoming the odds.  She is about ignoring the elements and pushing through the hard times knowing that something better waits on the other side.

And now she is a CHAMPION as well.

Post-race with Supergirl and Siamak

*Also of note is the fact that my friend pictured above, Siamak Mostoufi, who has appeared on this blog several times already, ALSO kicked some major trail butt at Run Woodstock as he set a new personal best, won his age group and took home 4th place overall in the 50 mile race.  What a great performance!  Can someone say SUPERFRIENDS!?!?

This entry was posted on September 9, 2012 by therunfactoryblog. It was filed under Philosophy, Race Reports, Training and was tagged with Adventure Run, Hallucination 100, Long run, Mental toughness, Philosophy, Psychology, Run Woodstock, Training, Ultrarunning.