I never stopped running. I never will. It’s who I am.

Since my last adventure recall back in September, life jumped down my throat, taking wild swings and unforeseen chops — testing me in every way like an ultra eats at you, mile by mile, aid station by aid station, poisoning you with thoughts of quitting, thoughts of defeat. It was tough. No question. But I didn’t give up. I put my head down and kept pounding pavement. I laughed. I cried. I fought.

Considering the severity of issues I faced, I found great difficulty in committing my thoughts to a public realm. The time wasn’t right. I needed separation. I needed solace.

But I never stopped running. 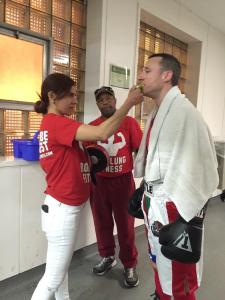 (Edna, Melvin and I, minutes before the bell rings)

November was a “rest” month. I took it easy, but shook my legs out regularly.

December was much the same, though I admit, these days I much fancy an hour long treadmill slog over a slick 20 degree bone chiller.

Like last year, January began my boxing training in earnest. I ran regularly (4-5 days a week) to stay conditioned, but much of my training focused on sport specific drills, including sparring. At the same time, my business, Iron Lung Fitness, doubled in size, leading to a heavier teaching load, including four aerobics classes each week that I led like Richard Simmons on Red Bull (still do! check them out!).

February introduced me to Alex Garcia, a local talent with big boxing ambitions. I took him under my wing and we went to war and had a great showing in March. I am very proud of him and look forward to his bright future.

And just last night, I followed up my 2015 Chicago Golden Gloves Championship with a trip to the 2016 Semi-Finals. The decision didn’t go my way, but I gave it my all and learned a whole lot about myself along the way, including the fact that I will be back in the ring sooner than later.

Self discovery = Putting myself in extreme situations that measure the size of my heart, mental strength and ability to adapt.

Getting in the ring and committing to combat… running a balls-out-marathon… covering 100 miles on my own two tired feet.

This is not the life everyone would choose. But it’s the only one I know.

(Working the mitts with the best partner one could ask for)

(Part of the Iron Lung team)

(Me, Edna and Papá Arturo)

My lovely fiancee, Edna Jackeline Vazquez, is training for Racing the Planet’s 250k race across the Namibian Desert and I’m going with her! Like I did in the Gobi last year, I am tagging along to work as a race volunteer and assure she doesn’t get homesick after 7 days of sand-trekking without a shower. It begins May 1st and I can hardly wait for all the adventure to come!

When we return, we will have just enough time to rest before running the Mohican 100, June 18-19. This is Edna’s birthday weekend and I promised her two belt buckles as a gift, even though it will most certainly require a bit of crying, pain and suffering. HAPPY MUTHAFUCKIN BIRTHDAY!!!

Mohican is a beast and we both know it.

Oh well. Bring it on, Mohican!

And after that? Who knows… maybe the Chicago Marathon if I can get in. Maybe some more local trail races. A real non-working vacation would be nice. And I imagine another fight or two or three will be on the schedule.

One thing is for sure in the Lung-Vazquez household: we don’t take no easy roads.