This article, by Alejandro Yanún, was originally published on June 12, 2015 in the Spanish language publication “Vívelo Hoy”.

Edna Jackeline Vazquez is used to adapting to circumstances and meeting new challenges. For this reason, when she was informed back in March that the ultramarathon of the Sahara Desert in Jordan was going to be canceled due to political problems, she quickly changed her chip to focus on a new goal: a 250 kilometer, 7 day race in the stunning Gobi Desert of northern China.

“The ISIS guerillas entered Jordan and the race organizers sent us an email informing us that the race would be canceled over concerns of terrorism, just a week before flying there. I had to totally retrain because in Jordan I would have been facing pure sand dunes while the Gobi Desert, in China, is the windiest desert with more rocky terrain, which would be faster but painful for the feet,” says Vazquez, who has been based in Chicago for several years.

The change worked to perfection because Vazquez, 34 years old with a degree in human resources and a masters in business, won her category for women aged 30 to 39, finishing fourth overall female in the competition and 26th among the entire field of 164 athletes.

To get an idea of the dimensions of the race, running 250 kilometers in the Gobi would be equivalent to running from Monterrey, Nuevo Leon, Mexico (Vazquez’s hometown) to McAllen, Texas, after crossing the border into the United States.

It should also be added, that among the difficulties presented by the actual competition itself, there is also the immediate change to the ‘biological clock’ for the athletes with a 14 hour time difference from China, as well as confronting an inflexible natural climate.

During the competition Vazquez also had to face extreme conditions, from temperatures as low as 5 degrees Celsius and snow storms that began the race up to temperatures of 47 Celsius (120 Farenheit). “The hardest moment was crossing the canyons,” she remembers. “You already get there tired and anything you touch on the ground causes you to lose your balance; in this moment the only thing you want is to leave that place.”

Edna Vazquez among many male competitors of the race.

There, in those subhuman conditions, is when the blood of a champion surges. For Vazquez, this quality is the result of a constant daily practice. “All of us desire to come here to America for the American dream,” says Vazquez, who believes that society forgets their ultimate goals while being entertained by momentary gratification. “The main thing is to let go of the economic issues and things that give instant pleasure in favor of developing other skills. The final goal is to have passion and be persistent. The thing that has helped me most is being dedicated, working hard and being persistent.

Vazquez’s consecration in China was not coincidental, but rather the result of a great team. The Monterrey native had a base strength program developed by Jeff Lung of Iron Lung Fitness, with a desert ultramarathon training plan developed by Nahila Hernandez. It also included a swimming program for muscular recovery, a yoga practice taught by the instructors at Tejas Yoga which also helped complement her concentration with muscle and mental relaxation, and the medical advice of Dr. Victor Garza Hernandez.

A stop along the way to share experiences with athletes from 40 nations.

The China competition is part of the Racing the Planet series, a circuit of elite ultramarathons for a limited group of athletes who could very well be considered some of the best prepared in the world. “We are an elite group and we can say that we are involved in one of the Top 10 most demanding competitions in the world,” explains Vazquez.

For the Gobi race, Vazquez flew to Beijing, the capital of China, then went on to Urumuqi and finally arrived at the small town of Hami, in northwest China, close to Mongolia, where Genghis Khan ran with his wild hordes 800 years ago.

In these arid and indomitable lands Vazquez arrived at the end of May to compete with ultramarathoners from 40 countries and all continents.

Vazquez ran with a backpack full of food that weighed 11 kilograms at the start but dwindled down to just 5 kilos at the end. In her backpack the Monterrey native carried dehydrated foods like precooked and compact lasagna and chicken with rice and noodles, to cover the necessary 1900 daily calories.

After completing ultramarathons of 100k in Spain, Belgium and Taiwan, as well as 250k in the Atacama Desert of Chile, considered the driest place on the planet, Vazquez focuses her attention on the next goal, the ultras of Namibia (Africa) in May of next year and Antarctica in November of 2016.

And facing new goals is her specialty. “When you think you have arrived at one goal, another is going to come, and later another. The the extent that you discover your abilities, you are going to discover more,” says Vazquez.

“I believe that we all have the capacity to develop our abilities and sport is one element that helps us face life and believe in ourselves,” she argues safely. “The important thing is to have passion for what you do and focus on your dreams.” 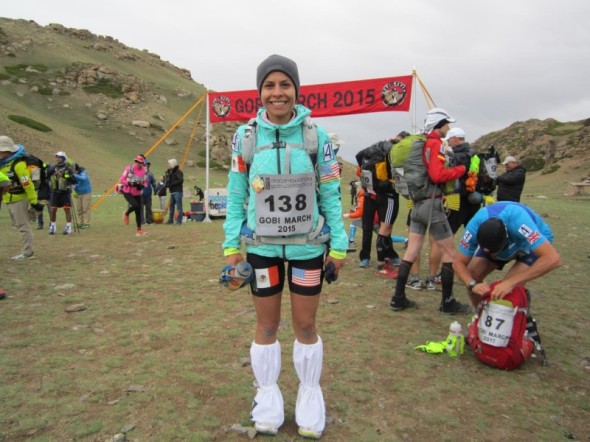 Edna competed with both the USA and Mexican flags on her uniform.