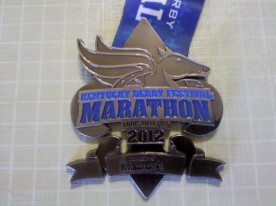 When I planned my 2012 race schedule, I made it a point to give myself a cookie — a nice, long, running cookie.  On pavement!

With two weeks to go until my spring target race, the Ice Age Trail 50 Miler, the Derby Marathon would be my first crack at running a road marathon as a training run: a super-exciting, fully supported, training run!  Having run the Derby Mini the year before with my brother-in-law, Patrick, I was quite familiar with the first 8 miles of the course, and I knew that the easy terrain and jubilant crowd support would make for a fantastic final long run before beginning my taper.

It did not disappoint.

I took off work Friday.  Early in the morning, I drove down to my sister’s place in Jeffersonville, IN, just across the bridge from Louisville.  That afternoon, Patrick and I picked up our race packets (he ran the mini), had a pasta dinner and were in bed by 9:30 p.m.  I slept fairly well, but I couldn’t shake all of my nervousness left over from the proceeding week.

After my hard effort last Sunday at the Earth Day 50K, I felt some ominous muscular oddities in my plantaris, behind my right knee.  Thinking it was something I could run off, I ended up aggravating it on Tuesday during a short recovery jog and decided that the best thing to do was to rest it completely.  This was not easy for me to do.  I’ve been averaging 60-70 miles a week, so to take it down so dramatically so quickly left me stewing.  BUT, part of being a running fiend is listening to your body — backing off when necessary, keeping things in perspective.  By Friday night, my plantaris felt about 85%.  I went to bed thinking I would at least start the race, but I had to make peace with the idea that if it became painful, I might have to drop.  Nothing could be worse than losing out to Ice Age because of an injury I could have prevented, I repeated to myself, as if counting sheep.

When I awoke at 5 a.m., my feet hit the ground and… VOILA!  No plantaris pain.  Some light, eccentric stretching confirmed such a miracle.  I ate some breakfast, lubed and laced up, and by 6:15 Patrick and I were out the door.

We parked at his office building across from the Yum Center, gave each other some encouraging words and then I left him to meet fellow Chicago running blogger, Dan Solera.  Dan is not only a good writer, but a great runner as well!  He is currently tackling the task of running a half-marathon in all 50 states and boy did he do something special in Louisville!  Check out his blog for the details. 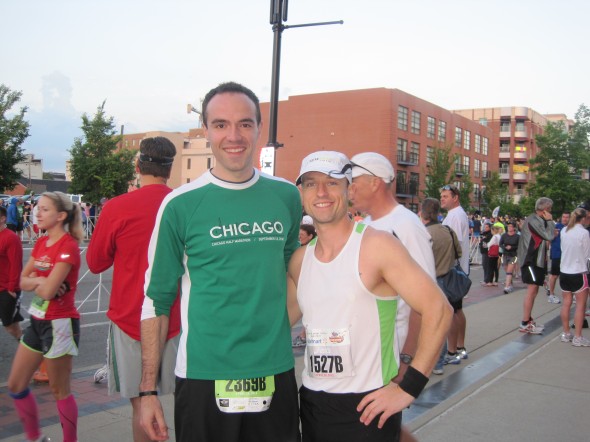 I entered my corral and reminded myself of the following:

The first few miles were pretty fun, I gotta admit.  Usually, this is not the case in a mega-race, but since I wasn’t watching my splits, I found it quite pleasant to just look around and soak up all the excitement of plodding away with 17,999 other people.  To an implanted, intentional observer, the start of a race is a fascinating mural of motion.  And since the half-marathoners and marathoners run the first 8.5 miles together, this was even more the case.  Runners of all abilities were jammed together, bumping elbows, lining up the tangents, gesturing and surging for position.

The Derby Marathon course if pretty flat.  The Mini is completely flat.  So I wasn’t even thinking about hills until mile 14 or so.  Instead, I marveled at the perfect weather (mid 50s with sunshine) and waited for the Churchill Downs section at mile 8, my favorite part of the course.

I already knew it was my favorite part from running the Mini last year.  So when I entered those hallowed grounds again I slowed a bit and took in the sights.  I even stopped and jogged backwards on the way out so I could have as much of it in my memory as possible.  My only disappointment was that this year they didn’t have the loudspeakers playing archived Derby broadcasts like they did before.  Hearing those speedy calls of the fastest two minutes in sports really gave me a mental boost last year, but in 2012 I’d have to do without.

When we exited the track, it wasn’t long before the marathoners split off from the half-marathoners.  And then…

Is anyone else running the full marathon? I asked myself as I turned right on to an empty street, seemingly by myself.  Up ahead were a few runners.  I looked behind and a woman said to me: Wow, that’s depressing, isn’t it?

Yeah.  I guess we’re on our own until the very end now, I replied.

I actually meant that I’d rather be running with them.

Not me, I said. I live for the long stuff.

She was right though.  It was a bit depressing.  For the rest of the race the crowd support would be sparse.  The silence continuous.  And just because I was taking my sweet-ass time, soaking in the experience, didn’t mean that my fellow runners were.  On the contrary, they were working hard.  Instead of engaging in conversation, I embraced the role of quiet observer.  I stared at a lot of calves and read the backs of many a tech-tee.

Meanwhile, as we entered Iroquois Park for the first of several gentle climbs, I noticed that my right calf was suffering from a deliberate forefoot strike, presumably from the weakened plantaris and extra days off.  I stopped several times to stretch it, checking in with the plantaris itself, but none of that really helped.  I was forced to alter into a midfoot strike, which meant as I tired, I would probably begin to land on my heels, which meant I’d most likely be doing the Frankenstein walk on Sunday, but that’s how it goes.  At least I was still running.  Pain free!

My recent ultratraining made the hills seem easy.  I encouraged others up the climbs, even leading a peloton of sorts for most of it.  Despite the camaraderie, part of me wanted to break off from the road and go discover whatever trails existed behind the beautiful green forest.  But just as soon as I my mind wondered about what was in there, we were descending out of the park and back onto the flats.

When I hit the 16 mile mark, I felt quite good.  Other than my right calf, nothing ached.  Nothing was debilitating.  There was no pain.  I thought to myself, just an easy 10 miler with my Wednesday night running buddies now.  I started to think about those guys and what they might be doing.  The Illinois Marathon.  Horseriders 27 Mile Club Run.  The Kettle Moraine Trainer.  I’ll see y’all on Wednesday, I thought.  Can’t wait!

By the 20 mile mark I reflected on how awesome it was to not be a part of the marathon carnage for once.  All around me people looked rough.  Cramping.  Spasms.  Dehydration.  That’s what happens when you give it your all in the mother of all race distances.  Hell, it KILLED Pheidippides!

I wanted to help.  I wanted to say Dig Deep and Lookin’ Good and Almost There to those who looked liked they needed it, but then I remembered how much I hated hearing that shit myself when feeling bad, so I just kept my mouth shut and respected the process.

When I got just past the 22 mile mark, the terrain shifted from flat and fast to mountainous and slow.  Of course, describing the elevation spikes as “mountainous” is more hyperbolic than truthful, but believe me: after running on road for that long, any climb is gonna look like Everest.  I ran the hills, but I ran them slowly.  And I didn’t fly down them like I normally do.  I kept myself in check, as I had been doing the entire race, and all I could think about with a mile to go was….. BEER.

So, I thought, let’s go get that beer sooner rather than later.  And I took off.

With a half mile left I looked down to see I was running 6:30 pace and decided to keep it right there.  The few spectators strewn about cheered me on and I gave ’em a show.

Where is everybody? I thought as I passed the 26 mile marker sign.  There should be crowds galore at the finish.

Then I made the right turn onto Preston Street, reuniting with the mini-runners, and realized that’s where they all were.  With a boosting roar of the crowd I turned on the afterburners and shot through the finish with a time of 3:43:25, almost an entire half hour slower than my current PR.

I did it right.  And had blast.

I got my medal, grabbed a banana and headed straight for the beer tent.

My only complaint (other than the absence of the Derby broadcast at Churchill Downs) is that for the first half of the marathon, not all of the aid stations were stocked with sports drink.  In my opinion, that is ABSOLUTELY UNACCEPTABLE.  It may be okay for a half-marathon, but in a full marathon, it is WISE to be drinking sports drink from the very beginning, to help defend against hyponatremia.  Had the temperature been warmer, this could have made for a very dangerous situation and race officials would be wise to address this danger for future events.

Also, it would’ve been nice to have crowd support for the full marathon like they do the half, but in my experience, this is commonplace in races that combine the two.