In Awe of Awesome 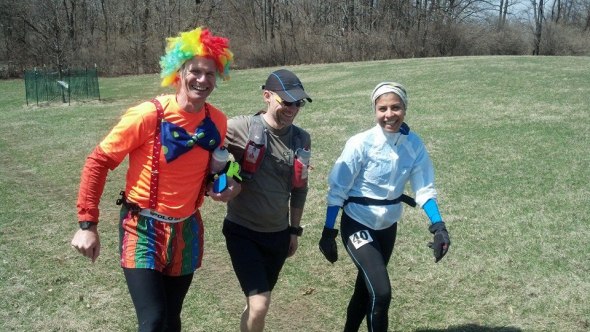 Robin (the clown), Siamak and Edna, approximately 70 miles in the Potawatomi Trail 150.

“What is thaaaaaaat?” asked Edna with a slurred voice somewhere between transcendence and delirium. “Look at thaaaaaaat! Why are there so many houses?”

It was 6:30 in the morning. We were approaching an open field covered with frost, and save for three twenty minute cat naps spread throughout, she had been awake and on her feet running for over 43 hours.

There were no houses.

She looked at me with big, wild eyes. The fatigue forced upon her by 30 degree temps, two sleepless nights and 99 miles on the Potawatomi Trail — a trail that leaves you feeling like you’re being eaten alive by piranhas, one little vicious bite at a time — left her speech and reaction time slow. Her behavior reminded me of Paul Krendler as Hannibal Lecter fed him his last meal.

I was overwhelmed with the desire to take away all her pain, to snap my fingers and have us be in a warm hotel, fresh and clean, discussing dinner plans or a book we just read. But before my mind could wander further off into those pleasant thoughts, she was digging deep. Again. Fighting with every bit of her being.

I was in complete awe of her ability to fight through myriad discomforts to prove she could do what she set out to do. She inspired me with her indomitable will, her mental toughness, her humility and her never ceasing smile.

Man, I love this girl.

Upon completing 100 miles, we (Team Edna) decided it was best to rest. With only 8 hours left, we knew there wasn’t enough time to complete another five 10-mile loops. In fact, of the 44 registered to run the 150 mile race, only 14 managed to finish it, many of them my friends. To them, I bow down with admiration. What a feat.

Edna’s 100 mile finish was an equally enlivening triumph. Life got in her way a lot the last six months, but just like in the race, she put her head down and soldiered forward despite the hardships. She never once complained. She never once considered giving up. She had zero regrets.

THAT is what living is all about.

That’s how the race as metaphor keeps forcing me to go bigger, to be better.

Edna did that. She does that. And I couldn’t be more proud. 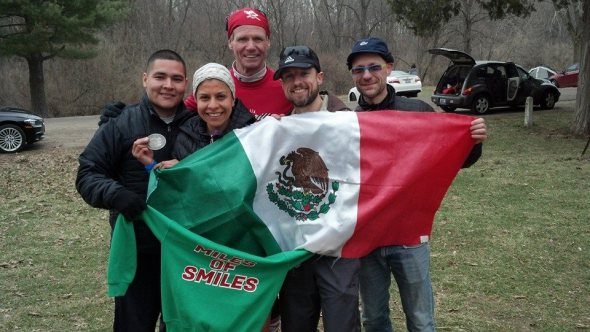 Special thanks to Team Edna members Robin Platt, Siamak Mostoufi and Raul Cervantes, Jr., all of whom played big roles in a smooth operation. Your loyalty and dedication to helping Edna get through the tough times will not be forgotten.

And to all of the runners, pacers, crew members, volunteers and race staff at the Potawatomi Trail Runs, I wish to give you all a great big virtual hug. The ultra community is family to me and having a front row seat to some of the most selfless acts of kindness and daring athletic performances is a pleasure I will always cherish.