Chicago Run: Empowering Our Youth, One Mile at a Time 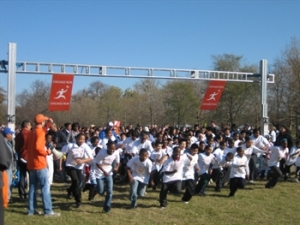 The smile on my face reassured them that indeed, I was just fine.  Ecstatic, actually.  Hours and hours of running tends to leave me with a permanent grin, even if the body aches.

After my first couple of hours circling the track, one of the dads from a nearby little league game approached me with his young son.  “Man, you’re a beast,” he said.  “I’ve been here for two baseball games and you’ve been running the whole time.”

The dad looked down at his son holding his hand.  “Do you mind if my son runs a lap with you?” he asked.

The boy let go of his father’s hand and hitched on to my heels.  I slowed my pace and asked him his name.  He responded by giggling and sprinting off ahead of me.  I ran to catch him.

Laughing and running.  I got a little chill up my spine.  This kid was having a blast.  And before I knew it, as we circled the track (a bit slower now that he reached his lactate threshold level, I assume) we gradually picked up other little leaguers from his team.  I counted six happy little runners following me in circles.  No talking, just giggling.  And several pick-ups in pace among them.

I didn’t say anything either.  Just smiled and kept on.  Our actions were more than enough.  I felt like the pied piper of fitness.  The kids were having fun just moving.

Because kids love to run!  It’s part of their nature!  It’s who they are!

Unfortunately, many Chicago kids are forced to curb that natural instinct.  They live in unsafe environments.  Their homes are in food deserts that leave them with poor nutrition.  They go to schools with budgets that fail them.

But Chicago Run, the non-profit organization Team LOL is running across Illinois for in a few weeks, is restoring that natural freedom back to the children who so desperately need it.  They are working with Chicago Public Schools to get kids active again.  They are building the foundation for a future of educated, empowered, physically fit young people — a foundation that is paramount to the wellness of our city.

They are doing amazing things.  They are putting smiles on kids’ faces.  They are making a difference.

And they need our help.  You can help by visiting *HERE*.

In the meantime, consider the case of Alex, a student from Walsh Elementary in the Pilsen neighborhood.  A participant in Chicago Run’s “Running Mates” program, affected by the program’s nutrition lessons and running challenges, Alex soon started to notice that his belt was in need of extra holes, that his pants were getting bigger and no longer fit properly.  He took the lessons he was learning and shared them with his family, igniting a healthier lifestyle at home.  Months later, Alex found himself on the steps of the White House, giving a speech on how Chicago Run empowered him to be healthy before introducing first lady, Michelle Obama.

Chicago Run is bringing health and longevity back to our kids.  Consider being a part of this important mission.  You won’t be sorry.