I owe the world a baseball metaphor.

Since I began training back in December for the Boston Marathon, 90% of my runs have taken place indoors. I have tried to get out at least once a week for a recovery or long run, but most of those workouts have been run at super slow snow picking pace. With the onslaught of sub-zero temps, knee-high snow and treacherously icy streets, I have been forced to go by heart rate, hoping that it ultimately translates to plus-fitness adaptations.

Creativity has been key on the treadmill. Trying to simulate the Boston Marathon course, while not actually going anywhere, has proved to be a difficult task, both mentally and physically. But pounding my quads with long, sustained downhills and interrupting tempo runs with three minute increments of squats, lunges and wall-sits has gotten me through much of that. So too have seven seasons of 30 Rock.

With eight and a half weeks left until race day, I feel like I still have enough time to log quality outdoor runs, but mother nature’s curveballs have definitely forced me to adapt my training plan. From a mental toughness point of view, these adaptations can only help. Besides, much of long distance racing is dealing with surprises on the fly.

As for the change-ups, I must shamefully admit my international race naivete. I knew the Mexico City Marathon registration opened in late January, but I (stupidly) didn’t think it would sell out — at least, not very quickly. Well, it did sell out. Very quickly. So in early February, when I went to sign up, I found out as much, and therefore had to opt for the half marathon version.

I was really looking forward to 26.2 in Mexico City to cap off a week’s vacation, but the half will have to suffice, which means I will be seeking out plenty of Mexican trail running in the days leading up to the event. 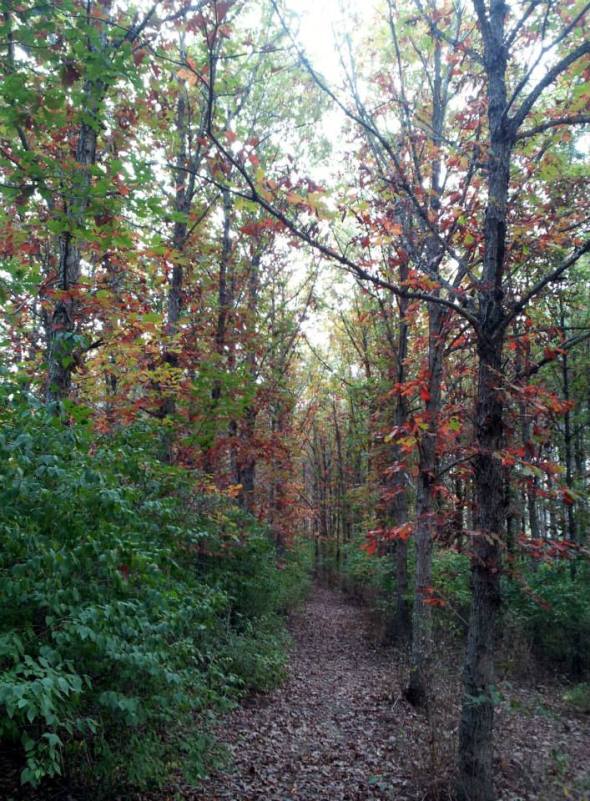 And just like the old adage proclaims, when one door closes, another opens. So I signed up for the Evergreen Lake Ultra and a Half (51 Miles) race being held on September 14, 2014, just a few hours’ drive from Chicago. I am friends with the race directors, Kirsten Pieper and Jim Street, both of whom have already been featured here in my Minnesota Voyageur report. Not only do they represent one of the best trail running acronyms of all time with the Shady Hollow Trail Runners (SHTRs), but they are also really cool people who sold me on this race by talking about the food they serve. If home cooked grub highlighted by scores of bacon is your thing, then you won’t want to miss this awesome race. Three different distances are offered, so make sure to check them out.

Hopefully by then we will all be out of our snow boots.

While I patiently wait for the Polar Vortex to subside so mother nature can give me a cleaner, safer surface on which to train, I continue to battle the elements the best I can. I’m approaching the end of my fourth week of Boston Marathon training and about half of my runs thus far have been on a treadmill.

Physically, I feel great. My body is working well. As I slowly build my endurance, I am getting regular sports massage, with lots of attention placed on those cranky calves. All systems are go for Boston right now, and while I continue to be conservative in my training, I still dream of running a sub-3 race come April 21, 2014.

That’s my “A” goal. That’s the dream of dreams, as it has been and will continue to be until I finally make that dream a reality.

But there is no denying that my conservative training approach (at least for now), may make running 6:50 pace for 26.2 miles on a challenging course more difficult than I’d hoped. Right now my speed workouts — hampered by sub-freezing temps and rusty legs — haven’t been ideal. The turnover is there, the leg and core strength is there, but the cardiovascular system has a long way to go to keep up with my demands. With 14 weeks of training left, I’m not sweatin’ it. I am going to give it my all on Patriot’s Day regardless, and that, ultimately, is all that counts.

But what about after Boston?

Yes, indeed, the time has come, my friends. In 2014 I aim to complete my first 100 mile race. The Pinhoti 100, on November 1, in Heflin, Alabama, will be the scene. Lots of New Leaf and M.U.D.D. friends will be there. I’m hoping to get my dad down there. Siamak the Beast has agreed to pace me. I’m ready to go further than I’ve ever gone before, mentally and physically.

Here is my tentative race plan:

January 11 – The Frozen Gnome 50k
My good friends from the McHenry County Ultrarunning Dudes and Dudettes (M.U.D.D.) put on great events and this one looks to be no different. 30 inches of snow accumulation so far this winter? Freezing rain? Hills galore? Bring on the suffering!

February 2 – The Groundhog Day Half Marathon
4-ish mile loopty loops in bone-chilling, snow covered Grand Rapids, Michigan? Like Phil said: I’ll give you a winter prediction: It’s gonna be cold, it’s gonna be grey, and it’s gonna last you for the rest of your life.

March 2 – The Armadillo Dash Half Marathon
As one who seeks out opportunities where travel and racing can be combined, I found what looks to be a quaint half marathon in College Station, TX about a 40-minute drive from my dad’s place. And while Texas temps in March may not be tropical, they are almost certain to be warmer than anything I’ll find in the Chi.

May 10 – Ice Age 50k
After the ass kickin’ I got last year, this is my 2014 revenge race. With some better planning and a good understanding of the course, I am hoping to go under 5 hours this time around.

July 18-19 – Christmas in July 24 Hour
What better way to prepare myself for my first hundred than running in circles for 24 hours? This race, put on by some friends of mine from the New Leaf club, is in my suburban backyard (Lisle, IL) and promises to be one heck of a fiesta. It’s on pavement. It’s on a short, one mile loop course. I’m looking forward to a post-race Frankenstein walk like I’ve never had before.

October 12 – The Chicago Marathon
Running my fourth straight Chicago Marathon proves to be the lone wild card in my 2014 schedule. Rumor (and history) suggests that this race is soon going to move to a lottery selection. I HOPE NOT! I remain hopeful that the registration process will be open like it has been. My steadfast ninja fingers are prepared to click forward the $170+ dollars as fast as they possibly can. For me, the biggest test with Chicago this year will be running it as a training run as opposed to balls-to-the-wall redlining.

November 1 – The Pinhoti 100
The holy grail. The heavy hitter. The big kahuna. For the greater part of 2014, my heart, and perhaps more literally my legs, will be focused on traversing 100 miles in one shot, for the very first time. And while I do feel a bit funny about throwing myself into a 100 miler that doesn’t even have a website (I’m told it is currently under construction), I have been assured by my friends — most importantly, Siamak, who ran it as his first hundred in 2012 — that this race is as challenging as it is breathtaking. I’m hoping it’s more breathtaking in the metaphorical sense, though in a 100 mile race it seems like there will certainly be some moments were even taking a breath seems impossible.

Because THAT — the unknown, the adventure, the THRILL of it all — is what makes running long so worthwhile, fulfilling and fun!