The Good, the Bad and the WHY NOT

In the days since my dizzying yet mind opening 24-hour jaunt around Lisle Community Park, my body has recovered in full, responding to the training bell better than I ever imagined. I can’t emphasize enough just how awesome it feels to be running at full strength again. After all the nagging injuries from last year, I wasn’t really sure how my body would respond to the big mileage races, but everything feels strong and solid right now, and that is a huge motivator.

The key, at least for now, seems to be pace.

When I run fast — and for me, anything under an 8-minute mile is something I consider “fast” — both of my Achilles flare up, stopping me for several days. I have tried different shoes, different strengthening exercises, different forms. All speed seems to lead to the same thing currently: stiff, bum, calcaneous flare ups that SUCK. So I’m just shelving fast miles for now.

Everything I run now is to prepare for the grueling test of the Pinhoti Trail 100. I will explore speed another day. Ain’t no need for a sub 10-minute anything in a hundred miler anyway. Looking at the elevation profile only confirms that.

Um… so that half marathon I am supposed to run in Mexico City next weekend… um… yeah… it was IN JULY.

I don’t know how I (nor my buddy who has been training diligently for it) missed that small detail, but I did. We did. I originally wanted to run the marathon, and bummed that it was sold out, quickly obliged to the website’s tempting me to run the half instead. Assuming that it would be on the same day — because that’s how it usually works, the full and the half are held on the same day, simultaneously — I gladly signed up. To my credit, as far as I can remember, there was NO MENTION of the actual date of the race during the sign-up nor the confirmation process. I double checked the confirmation email to make sure.

Then, last month, as a follower of the race’s Facebook page, I was quite curious as to why there was another half marathon, under the same race name, a month earlier than the one I signed up for. Still, I never did conclude that the half marathon pictures I was seeing were from a race I was supposed to be running. It just didn’t make sense. My Mexico City Half Marathon was going to be on August 31.

It was only after recently checking packet pick-up details that the mistake was realized.

Oh well. There’s not much I can do about it now. While I’m a little sad I missed out on my first international race, I am still excited about visiting La Ciudad and exploring whatever roads and trails it has to offer. Maybe my friend and I will run our own half marathon.

While I’m at it, I might as well run the Peapod Half Madness Half Marathon in Batavia this weekend. For the fourth year in a row. I won’t be running a personal best this year. In fact, I will probably have to work hard just to break two hours; but, in my opinion, this is one of the most fun, most charming races in all of Chicagoland: a scenic, challenging 13.1 miles through a quaint river town with all-you-can-eat pizza and all-you-can-drink Sam Adams beer at the finish line.

What’s not to love?!

And while I’m at the long, slow, fun running, I might as well enjoy twice the marathon action during the second weekend of October. At least, that’s what I was thinking when I recently signed up for the Prairie State Marathon. It’s the day before the Chicago Marathon, and should serve as a suitable warm-up to my favorite Sunday 26.2. Three weeks out from my first hundred miler, I figure back-t0-back marathons should be a nice way to start my taper.

As if ultrarunners actually taper.

2013: A Year of Patience, Perseverance and Perspective

After a 2012 that saw me break beaucoup barriers and dream of crossing the marathon finish line with a 2-hour-something time, it would be easy to assume that 2013 was a letdown year for me. I didn’t come close to my goal time for 26.2. I suffered through a long recovery from ITBS. I got a nasty case of Achilles tendonitis.

But just like in any other discourse, life is what you make it.

I started my own business.

I negative split the marathon for the first time while simultaneously experiencing triumph through tragedy.

I played in the woods with my friends.

I paced two other friends in two different but equally epic 100 mile races: Kettle Moraine 100 and the iconic, granddaddy of them all, Western States 100.

Despite the heavy rain and relentless terrain, I answered the bell for all 50 miles of the Minnesota Voyageur and had a kickass time doing it.

I PR’d the half marathon in one of my favorite local races.

I played in the woods with my friends, again.

I was reminded to be grateful for what I have, to live in the moment, to enjoy every second of life as it comes.

I volunteered at the Earth Day 50k, the Des Plaines River Trail 50 Miler and the inaugural Naperville Marathon, perfecting the art of cowbell ringing in one hand while handing out aid with the other.

I had another race report published in Ultrarunning Magazine (October issue).

And I fell in love.

Thank you, 2013. My graciously heartfelt smile remains from ear to ear. 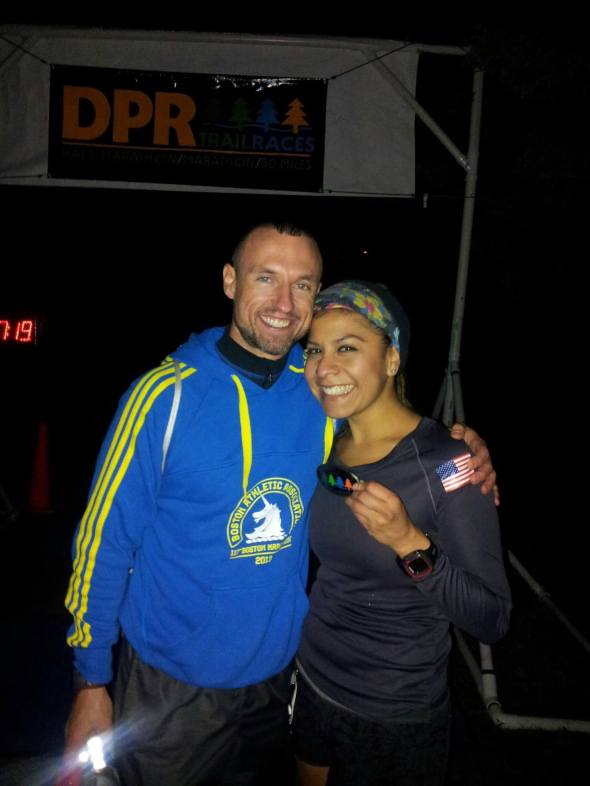 Goodbye, dear 2012, and thanks for the memories.  From a running standpoint, 2012 will go down as the year I upped my game beyond what I ever thought was possible.  And I have the jawbreaking ear-to-ear smile to prove it.

I raced two major marathons and PR’d them both (Houston in January and Chicago in October).  The Chicago race served as my very first Boston Qualifier — a feat that leaves me eternally proud and acutely focused.

In May, I finished my very first 50 mile race at the Ice Age 50 and followed that up in August by logging 50.85 miles during the Howl at the Moon 8 Hour Run.  In the latter race, I also tasted another top ten finish (8th Overall), to go along with those achieved at Clinton Lake (8th Overall) and the Earth Day 50K (1st in Age Division, 4th Overall).

I also ran a few short races, completing my third Chinatown 5K (the race that started it all), while also logging a then PR in the half marathon at Batavia and a respectable time in my first short-distance trail event.

Plus, I got to spend a lot of time with my dear friends from the New Leaf Ultra Runs club, including two unforgettable 100 mile Supergirl pacing experiences (Mohican 100 and Hallucination 100), an inspiring Run Across Illinois and the most liberating impromptu adventure run I have yet to have.

No doubt, 2012 was something to remember.

It was also something to learn from, as the continuous pushing of my body without adequate rest eventually led to an IT band injury and a sincere reevaluation of my training techniques.  But I am happy to report that after 6 weeks off and a highly focused physical therapy regimen, I have begun to run again pain-free and feel confident that I will be able to put forth 100% effort in training for my next major event, the Boston Marathon.

Indeed, a sub-3 hour attempt at Houston in two weeks will not be possible.  However, I was able to transfer my registration down to the half marathon, which I will use as a barometer for my current fitness, the base from which I will begin Boston training in earnest.

And while I do have a couple of 50Ks and perhaps one 50 miler on the schedule for 2013, my main focus will be on the marathon distance and breaking that 3 hour mark.  I am obsessed (in the very best way possible) with seeing my name followed by a 2-something marathon time.  I will do it, by golly.

And when I do, I’m having a big party.  You’re all invited.

Peace, love and all the running happiness in the world!